One of the most worn out phrases in games journalism has to be “If you’re a fan.”

And why not? With the way game development works and the fact that sequels are far more likely to get the green light from a publisher than an untested property, it’s in the best interest of those companies to release things that they know will hit their consumer’s sweet spot.

Fallout 4 falls into this pit, for better and worse.

I am currently reviewing the game for print review, which will run on 11/19 in The Toledo Blade. Below are my initial impressions, as well as a short, spoiler-free video I created to show the basics.

Remember Fallout 3 and New Vegas? The buggy, yet expansive, quirky, and dark Bethesda game from years past? To be blunt, Fallout 4 is more of the same things that the aforementioned titles brought to the table, but with some fine tuning that improves the experience all around.

The player will spend less time in menus and staring at statistics, taking their time to make decisions. This goes double for the returning VATS system, which opts for bullet-time speeds in lieu of stopping gameplay completely while you make decisions on what you’re shooting.

The reason for this change is that the gunplay and combat has been tweaked to feel more like an active shooter. Where New Vegas and Fallout 3 always felt like a jack of all trades, but master of neither first-person shooting or dice-based role play, Fallout 4 manages to make both feel unique without one being better than the other.

Some weapons such as the flamethrower simply work better out of VATS, while non-automatic weapons are perfect for taking out limbs. Anyone who wanted their shooting experience while in the wasteland to feel tighter will be happy to know that seldom do perfectly lined-up shots just miss out of nowhere. 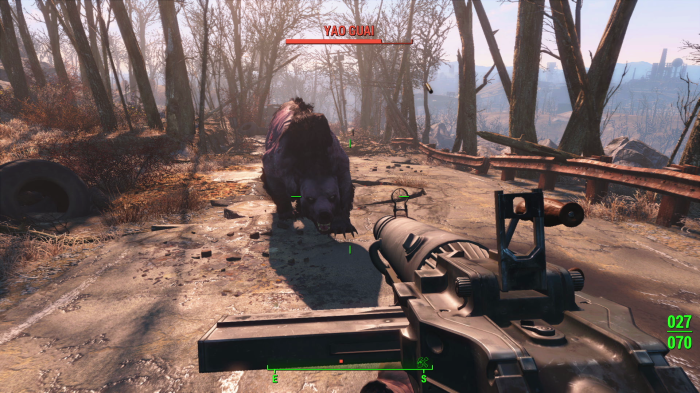 The most talked about issue from speculative fans leading up to the release of Fallout 4 has been the art design, graphics engine, and how well — or poor — the game runs on console. As with past Fallout games, this is determined purely on if you’re willing to put up with Bethesda jankiness. Do you mind some random glitches and bugs? Do a few frame rate hiccups in heavily populated areas ruin your day?

I’d highly recommend the PC version, which has been reported to be the more stable of the three versions, thanks in large part to the power available. The game isn’t perfect, and I don’t plan on giving Bethesda a pass simply because I love Fallout, but I never ran into anything game breaking, which seemed to happen around every corner in past titles.

I could say more, but I’ll let the video I put together do most of the talking. Keep an eye open for more impressions through the week, as well as official reviews next week.

Stay safe out there in the wasteland.

Will Harrison is the games critic for The Toledo Blade, a daily newspaper in Toledo, Ohio. Contact him on Twitter @DoubleUHarrison or via email at backlogadventures@gmail.com.