Skip to content
HomeBacklog Adventures’ Game of the Year 2014

I just remembered that ‘Twitch Plays Pokemon’ happened in 2014. That feels like such a long time ago. Maybe I’m getting older, but that cliche of the years flying by seems more and more relevant.

Many great games saw a 2014 release. The first full year in the new gaming cycle, 2014 has proven to be as exciting as last year in regards to releases, even if some of those said releases saw re-release this year.

Release is a funny word when said over and over, by the way. Try it out.

Ground rules: In this list of my top five best games of 2014 I have made some stipulations. Only games that I have actually played a significant chunk of are to be included. As much as I love the Donkey Kong Country games, I did not play Tropical Freeze and will not try and say that a game I did not play is one of my top games of the year. Common sense, folks. Use it.

New stipulation for 2014: I will never include HD remasters or re-releases. Sorry. I liked games the first time I played them.

Stipulation the second: DLC counts. In a new age where DLC can drastically change how a game acts and reacts, such as X-Com Enemy Within or Bioshock 2‘s “Minerva’s Den,” it would be silly to not take updates and additional content into consideration.

With introductions out of the way I now present my top five games of the year 2014. 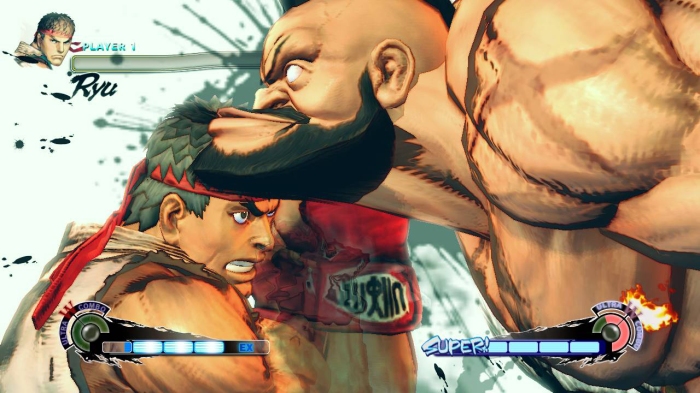 Great measures must be taken to ensure that a title originally released in 2008 stays fresh. Despite their recent money issues and poor decisions in regards to game development, Capcom must be given credit for knowing that Street Fighter is their lifeblood. Street Fighter IV was initially a game looked at with raised eyebrows by competitive fans and casual consumers alike.

Could a nine year hiatus in between numbered releases in the classic series mend old wounds from a previous release? Street Fighter 3: Third Strike was too complicated for casuals, yet too unbalanced for a majority of the FGC.

Ultra Street Fighter IV is the culmination of six years of work, community feedback, hype, and giving the fans what they want. Including new characters, new venues, and yet more character changes, Ultra proves to be the most newbie-friendly, yet competitively balanced fighting game of the last fifteen years.

This isn’t just a case of Capcom attempting to squeeze blood from a stone; the fans care about the franchise and each expansion update has seen drastic changes. While these changes are nuanced and won’t matter to the outside observer, said changes are paramount. After all, there is a reason that the now annual Evolution Fighting Game Series tournament pulled in record numbers again this year, nearing almost 200,000 live viewers for the Ultra grand finals.

4. South Park: The Stick of Truth 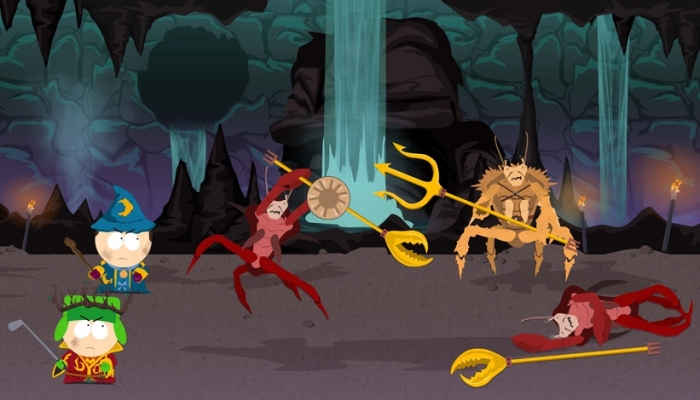 Who could have guessed that such an idea not only works, but is damn good? Not me. Given the fact that South Park: The Stick of Truth saw the rockiest of development, changing publishers in the wake of THQ closing, it may be a miracle that the game came out at all.

We as gamers should be glad, as it is rare to see any game–let alone a licensed game–with as much humor, attention to detail, and quick wit as The Stick of Truth has. Much of this can be attributed to the double whammy of Obsidian, known for some of the most well-regarded RPGs of the last twenty years, and that South Park creators Matt Stone and Trey Parker were in charge of the script, as well as the game’s attention to detail.

What detail, you may ask? The Stick of Truth is a love letter to any and every joke that ever worked on the show. From the stuff everyone expects like the over-obvious anti-Semitism to smaller things like ‘Taco Flavored Kisses’ playing over the radio in the post office, the game drips with canon.

Even if you aren’t in love with South Park, I believe the merits of the script are more than enough to keep one laughing. The script is genuinely funny, even without the constant nods to South Park lore. Believe it or not, a South Park game is one of the best RPGs of the year.

More than just another retro-style, pixel art indie game, Shovel Knight proves to be a refinement of the past, not just a nostalgia trip. Too many times in the last five years have indie games came out that were spawned from a zone of nostalgia for the games of the 1990s. To the detriment of these games, they have the look as well as the feel of those titles they seek to emulate.

That is not a good thing.

Shovel Knight aims to be better than just an homage to a time past. Providing poignant story beats, perfectly precise controls, and an art style with as much heart and tone as any console AAA title, Shovel Knight deserves to be talked about with the likes of Shadow of Mordor and Dragon Age: Inquisition.

Shovel Knight isn’t just a throwback to the games of our youth; it is better.

Remember what I said earlier about the changing perceptions of licensed titles? Throw Lord of the Rings games into that “mediocre games’ heap. many below average to downright terrible LotR games have existed. Leading up to the release of Shadow of Mordor, nobody knew how to approach the title. Looking like a mix between the Batman: Arkham series and Assassin’s Creed, a burning trash pile of mediocre could have been laying in wait.

Who knew that WB would turn out a title that is superior to any game in either of the previous mentioned series’, but also one of the best games of the year?

Shadow of Mordor‘s ace in the hole is it’s Nemesis System, a progressive enemy hierarchy that provides constantly changing variables to how enemies are fought and how they exist in the game world at large. I could go on for hours about how wonderful the Nemesis AI system is, but I just don’t have the space. Safe to say, the system is one of the most innovative game systems that consumers have seen in a long time. 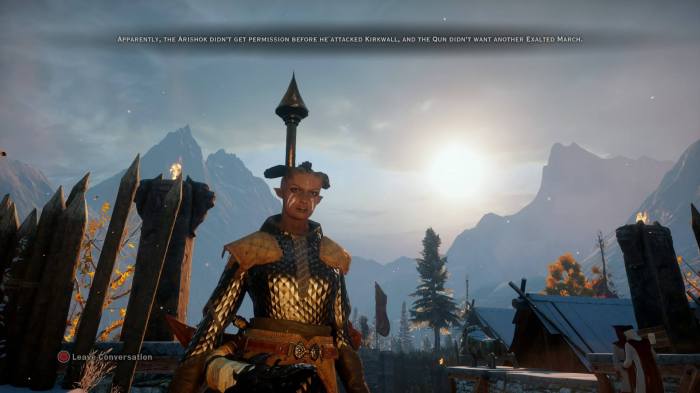 As of this writing I have spent 89 hours on Dragon Age: Inquisition. Want to know the last time I spent this much time on a game?

Even outside of my fandom for the series (did I mention that I also own the pen-and-paper Dragon Age RPG books?), Inquisition is a return to form for a series that fell on its face at last we saw it and a developer that, thanks to a string of disappointing releases, had ruined much of it’s goodwill with fans.

Inquisition is everything great about Origins, the few things that worked in Dragon Age 2, and a clear indication that Bioware listened in regards to complains about the series as a whole.

One of Inquisition‘s biggest selling points are the gigantic, active areas that feature a wealth of variety in content and aesthetic. From haunted bogs and shifting sands to rolling hills and hidden temples, Inquisition never leaves a feeling of repetition in regards to it’s locales.

An epic, classic high fantasy story is another strong focus of Inquisition, weaving a tale that will keep players engrossed for many hours to come. Despite steady stream of bugs that have hampered the game for some, I feel that the positives of the game more than trump other releases this year, as well as any issues said bugs have created.

Games that were strongly considered, in a few sentences or less:

Super Smash Bros.: As much as I love Smash, not much has changed between releases. A solid game, but shows Nintendo’s willingness to sticking to the development script.

Hearthstone: As much as I love Blizzard and collectible card games, I feel like this title is going to be a constant work-in-progress. Also: Priest decks are bullshit.

Dark Souls 2: Consider this to be 6th on the list. A wonderful game that maybe suffered from coming out so early in the year. I greatly look forward to the PS4 remaster due to my PC crying from being under-powered.

Child of Light: Yet another case of being cursed by coming out so early in 2014, Child of Light is a beautiful, haunting game with one of the best soundtracks and visual styles of the year.

The Walking Dead: Season 2: 7th place, essentially. Not nearly as good as Season 1, but continued the tradition of a tense, tragic story that kept me yearning for the release of each new episode.

Games that were never considered, and why:

Mario Kart 8: The same reason as Smash, in a game I didn’t get to play.

Infamous: Second Son: Starts great and slowly falls apart as the game progresses. However, the game is absolutely beautiful.

One thought on “Backlog Adventures’ Game of the Year 2014”