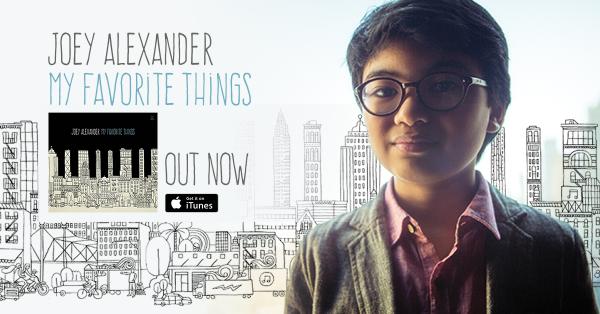 What were you doing when you were 12? I was listening to music and just forming my own sense of style. Most of you probably weren’t nominated for 2 Grammy awards. Twelve year-old Joey Alexander was.

His album “My Favorite Things” was nominated for  Best Jazz Instrumental Album and best Improvised Jazz Solo. While he didn’t win Joey stunned at the Grammy Pre-Show.

Joey was born in Indonesia and grew up listening to jazz with his parents, he taught himself to play piano by six and was memorizing by ear compositions by other people on this list including Thelonious Monk.

What I like most of all about Joey Alexander is that he is only 12. Now I know a lot of kids rebel and move away from the things of their youth but I believe that young Joey Alexander has the potential to be the most important jazz musician of his generation. His talent surpasses that of much older and much more experienced players.

Day 8’s song that inspires me is “Giant Steps” which is the song that was nominated for Best Improvised Jazz Solo.