For my darling wife Rachel on her 26th birthday.

Some things are better left unsaid. Nothing is more true when it comes to the art of storytelling and the ability of a tale to not reveal all of the cards being held. The concept of letting a viewer or reader find their own way through a story or performance, left to their own devices to piece together plot, motive, and context is one of the oldest and most important fundamentals of storytelling.

Video games in the current era are getting in on the act, using the environment, items, actions, and sometimes a lack thereof all three in order to tell a story without telling the story.

Whether it’s a ragged doll in Dark Souls, a wrong turn down a stairwell in Bioshock Infinite, or the discovery of what beard hair and animal manure can do in Don’t Starve, it’s all part of contextual storytelling that allows players to find as much or as little of the details as they want.

My favorite games of the last few years have been ones that tell their stories in new and inventive ways. Maybe it’s because I’m older, but I have grown tired of exposition-laden diatribes from characters created specifically for that purpose. I do not need to see characters in an RPG have a hokey, melodramatic conversation after the amnesiac, brooding hero leaves the room about how “He’s had a hard life, you know. Here is why!” No longer do I require my action-packed hero to go on a long-winded rant about how he’s lost everything so nothing is holding him back. I require finesse in how story is dolled out.

Some of the best games of recent years are doing just that, and they are doing so by providing exposition, motive, and story progression through new means. By using environmental details, object descriptions, the lost art of exploration and more, modern gaming is in a storytelling revolution that is changing how players approach content.

At the top of many journalists game of the year lists was Bioshock Infinite, a game that thrives on giving the player as little or as much story context as they wish without sacrificing the overall plot. As players explore the seemingly idyllic city of Columbia, myriad alleyways lead to new paths, characters converse about their day-to-day lives, and voxophone recordings are left for the player to delve further into the motivations of specific characters.

The voxophone recordings are especially important to Bioshock‘s story. Even though they are optional, upon being picked up the recordings give a clip of storytelling and exposition from one of the many major players in the story. Video snippets in the form of machines can also be found around Columbia, alluding to events in the city as well as it’s construction. All of this content is optional. The player is in no way required to pick up any of the recordings in order to progress the story. However, if you chose to, a rich back story awaits, often filling in the gaps of character motivations, behind the scenes looks at events not shown, or alternate angles to events that have happened.

One of the most important is a voxophone left by Dr. Fink, who makes mention of looking through a portal to another world and seeing men made of flesh and machine. This is  a clear reference to the previous entries in the Bioshock series, as well as insight into the origin of Infinite’s most fearsome enemy, the Handyman, a hulking giant machine with the heart and mind of a man.

Infinite takes context to another level past mere object retrieval, as events and sequences can be found in the game that may be missed entirely. My favorite and the best example is when Booker and Elizabeth are forced to retreat to the slums of Columbia. Stepping through a dimensional tear created by Elizabeth, they find themselves in the same slums again, this time embroiled in chaos, blood, and violence from the Vox Populi revolt. The game urges you to press on to the next action sequence, but if players take their time and explore in the chaos, one of the best moments last year in gaming can be found.

This scene is optional and easy to miss, so much so I never saw it occur in my first play through. The scene goes a long way to showing the violence of the city, and what type of person Elizabeth is.

Some games don’t use context to create large, sweeping moments like Bioshock Infinite. Sometimes, context is used to push the sense of discovery in a terrifyingly morose world. Don’t Starve, the indie darling adventure exploration game from Klei Entertainment, is a game based on poking and prodding everything around the player. This may mean trying to combine items in one scenario, or seeing what happens when you try to use shears on the cow-like Beefalo that roam the wilds of this creepy universe. Don’t Starve is all about the journey and finding out how everything in the universe ticks.

Using observations by your character when inspecting items, enemies, and world objects, players can suss out the multiple uses of items along the way. Whether this is collecting rocks and logs that later get turned into a fort, or even collecting Beefalo manure for multiple, multiple uses, Don’t Starve’s charm and beauty come from it’s use of context to set up the world and how things exist in said world. 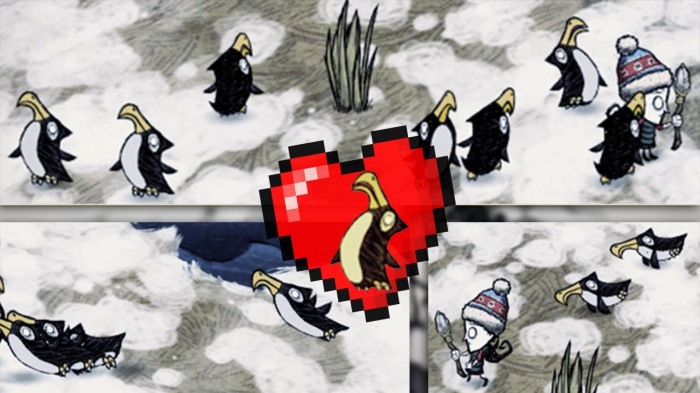 By far my favorite example of contextual game play comes in the form of From Soft’s action adventure masterpiece Dark Souls. This is a game that most people are either in love with or hate wish a passion, and the way the story is told is a large part of that. Large chunks of the main story line can be missed if the player doesn’t have a keen eye for detail. Of course, not everyone is okay with this type of storytelling. I lent the game to a friend of mine recently and his response was a resounding “meh.” After trying to figure out why, he mentioned that he didn’t quite understand what was going on or what the purpose of the game was.

I don’t blame him. Dark Souls is an aggressive game that can seem like it hates the player. The difficulty is high, requires precise control, and the ability to laterally think if you want to get the most out of the story. This is also what I consider to be the genius of Dark Souls, as even something like the level layout and design provide context to the story. When players first land in this dark world the only instructions given are to ring two bells, one high up and one far below. These two choices shape the player’s perception of the world, as well as begins to map out the multiple choices afoot. Players soon learn that the darkness is not their friend and often hides things that are best tackled later on, when players are better equipped.

This equipping process is also a source of great storytelling that many players may miss, in the form of flavor text and descriptions on 98% of the items picked up throughout the game. Every item gives great bits of exposition on everything from the locations of the Dark Souls world to some of the biggest players in the story. The only way players ever learn anything of note about the main bosses of the game are from item descriptions.

Hands down, my favorite use of this storytelling involves the knight Artorias, the greatest hero and saddest downfall in the Dark Souls world. Artorias was the strongest and most revered knight of Lord Gwyn’s court, defending the realm of Anor Londo with vigor and steadfast chivalry. The plot of the game reveals little, if anything about Artorias, other than that the great wolf Sif is guarding his grave, which happens to hold an item the player must have to proceed. After slaying the wolf and receiving Artorias’ ring, you plunge into the great abyss which was not penetrable before. Why was Sif guarding the grave? Why did Artorias possess a ring that let him walk the dark, poisonous realm of the abyss? More to the point, what happened to Artorias?

All of these questions and more are revealed in a combination of item descriptions, snippets of dialog from characters in the universe, and new content added in the “Prepare to Die” DLC update.

Lo and behold, when players venture into the DLC world which takes them into the past of Lorderon, Artorias awaits, corrupted and literally dripping with darkness. Is this the great knight of the sun that the items have been describing? It is, and through character interactions, item and armor descriptions, and a few choice events towards the end of the content involving a younger Sif, we learn of Artorias’ fall from greatness.

If players complete the boss fight with Artorias before fighting Sif in the main story line, a great scene occurs beforehand that is just another stellar example of what Dark Souls can do with the smallest attention to detail.

And to think, all of this is optional and easily missed. Players can take in as much or as little of this content as they want. I enjoy that aspect of this type of storytelling. Rather than having a character shout exposition at me for five minutes I would much rather prefer to investigate a strange new world and everything within it to find the answers I am looking for. This is a growing trend in gaming, especially with independently developed titles such as Gone Home and Rogue Legacy.

While this type of storytelling requires more work on part of the player, it’s also far more rewarding. After all, sometimes the best things we learn are the things we find for ourselves.

3 thoughts on “On contextual storytelling, Dark Souls, and Don’t Starve”